As I mentioned on Saturday, we spent the weekend in Belfast to attend the christening of our new wee nephew. It was the first christening I’ve been to so the whole day was a learning experience and I really enjoyed it (though I’m not sure that the priests use of the word ‘ass’ in the service was particularly traditional).

How cute is that wee baby?!

Contrary to how it may appear with all of my pictures of churches and cathedrals I’m not at all religious – I just like a good church – and as religion is quite an important part of Irish life and culture I’ve learned quite a lot over my 5 years with Damian. Damian’s family don’t seem to mind my incessant questions and I don’t think I’ve embarrassed them terribly yet so all in all it’s gone pretty well!

While we were in Northern Ireland we took the opportunity to visit Armagh, a small city about 40 miles south-west of Belfast, with our niece. Describing Armagh as a city is somewhat deceptive as it is really just a big-ish town, but it was granted city status by the Queen in 1994 so now it can make the impressive claim to be the least populated city in Northern Ireland.

That being said, it is a lovely ‘city’ with lots of interesting things to see and do. In our few hours there we walked through town and visited the two main churches, both called St. Patrick’s. The two churches, one Church of Ireland and one Roman Catholic, bookend the town and can be easily reached from each other by foot. Another of Armagh’s unusual distinctions is to be the only city in the world with two identically named cathedrals. This place is just full of surprises!

The most interesting part of the Church of Ireland Cathedral to me was that this site is believed to be the final resting place of Brian Boru, the last great High King of Ireland. As this plaque explains, after being killed near Dublin Boru’s body was brought to Armagh and buried. The name Brian Boru comes up frequently when visiting historical sites in Ireland so it was interesting to happen upon his final resting place in Armagh.

A short, but hilly, walk away you will find the catholic cathedral – a newer and grander building. The 64 metre high twin spires loom larger over the city, and combined with the cathedral’s position high on a hill make the building rather impressive. From the front steps you can see the whole city and the surrounding countryside, which on a nice sunny day is a lovely view. 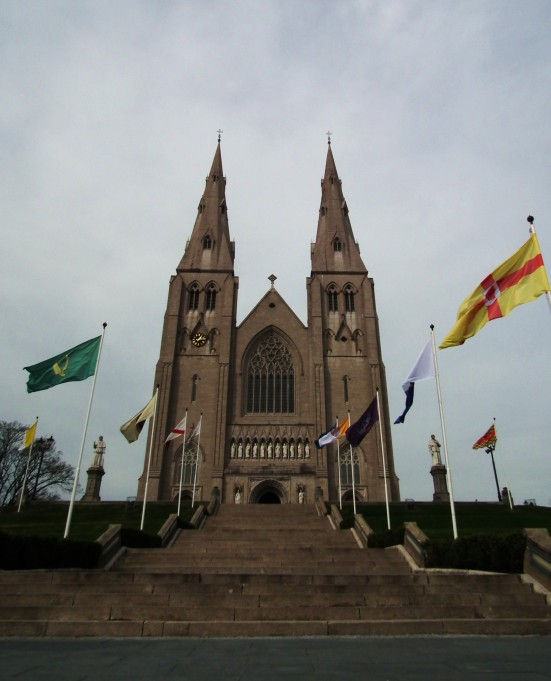 There happened to be a wedding in progress when we arrived, but we were still allowed in and I was able to take a few unobtrusive photographs. The mosaics inside are amazing, I especially like the floor, and one can quickly see why you would want to get married here, even though your ceremony will repeatedly be intruded upon by tourists!

Armagh is probably not on the top of your ‘must visit’ list but it would make a nice stop on a Northern Ireland road trip, or a day-trip from Belfast. We also visited the Armagh Planetarium while we were there and watched Experience the Aurora on the big domed screen, and it was also worth a visit. There’s a surprising amount to see in Armagh, who knew?

I hope you all had a nice weekend wherever you were and that you got some of the blissful sun that we did! Welcome spring!