“España 140km”, the sign said as we drove down the highway from our temporary home in Pezenas. 140km?! That’s nothing, I thought. That’s a shorter trip than Ottawa to Montreal, and I know people who will drive that for good sushi or a chichi haircut. Once I saw that we could drive from one country to another in only slightly more than an hour there was only one thing to be done….

We love a good road trip. There are few things I enjoy more than taking to the highways and byways with a picnic lunch and only a loose plan of where to stop. Our first trip together was a road trip as a matter of fact, down the Great Ocean Road in Australia, and we haven’t stopped since. Together (and often with my Mom in tow) we have circumnavigated Ireland, dodged wallabies in Tasmania, braved the wind and rain on the East Coast of Canada and most recently taken our lives into our own hands on the roads of France. I can’t even imagine how many thousands of miles we’ve done, on this trip alone we have exceeded 6 000 miles, and we aren’t even close to done.

Roadtripping from France to Spain

On a sunny Tuesday morning in May we set off for Spain. The trunk was packed, my mom was comfortably installed in the backseat (I offered her the front but she doesn’t like the responsibility of navigating!) and we were ready to take advantage of the novelty of small European countries. An hour later we were approaching the Spanish border, at which time we realized that we had all forgotten our passports. Those last twenty kilometers or so were a bit tense in our little Honda Civic.

All hail the European Union! Unchecked border crossings are but one of the delights of the EU, so we all breathed a sigh of relief and continued on our way.

Barcelona is one of those cities that people rave about. The food is unbelievable, the city is vibrant and bustling, and the architecture…..well, thanks to visionaries like Gaudi it is a sight to behold. We discovered that not only is all of the hype true, but it’s also one of the most inexpensive major European cities we’ve visited. A cup of coffee or pint of beer is cheaper in the centre of Barcelona than it is in small town France. Compare the prices to other major European cities like Paris or Amsterdam and we’re talking a fraction of the price. All things considered, Barcelona is a win, win, win!

When you look at a map, Barcelona is in Spain, but when you step on the streets it is clear that this is in name only. On apartment balconies it is the Catalonian, not the Spanish, flag that flies, and on street corners and in cafés the conversations you overhear are more than likely spoken not in Spanish but in Catalan. Before leaving home it isn’t the phrase “No hablo Español” that you need to learn, but “No parlo Català.” 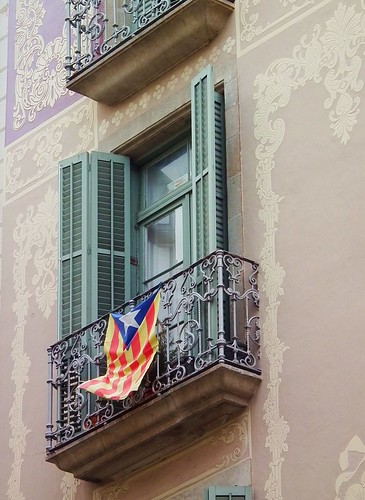 Barcelona is the capital of Catalonia, an autonomous community of Spain, which means that the historical and cultural identity of the region is recognized by the central Spanish government, as well as a certain level of self-government. Within Spain there are five different historical nationalities, Spanish, Galician, Basque, Catalan and Valencian, with their own unique languages, history and culture. Within one country there are many different “Spains” to visit, all of which offer something different and authentic in its own right.

By eleven o’clock we were checked into our hotel, the lovely Hotel Laumon in the neighbourhood of La Sagrera, and by noon we had hit the streets of Barcelona.

So, what can you fit in on a 24 hour trip to Barcelona? Well, here’s what we managed. 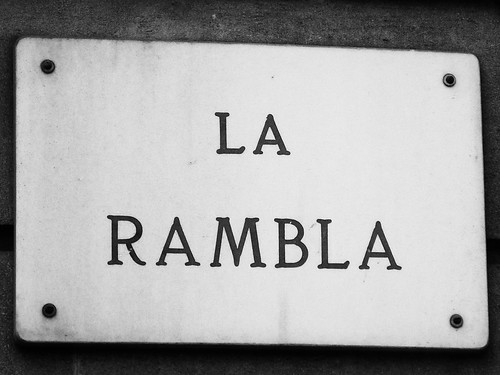 After a quick trip on the super modern subway system we emerged onto the streets of downtown Barcelona and headed towards La Rambla, a 1.2km long pedestrian mall. The street is lined with shops and restaurants, and even on a Tuesday morning in March it was packed with people, locals and tourists alike. Catalan, Spanish, English, French, German, Dutch, Flemish….we heard them all while walking and people watching along this famous stretch of street. 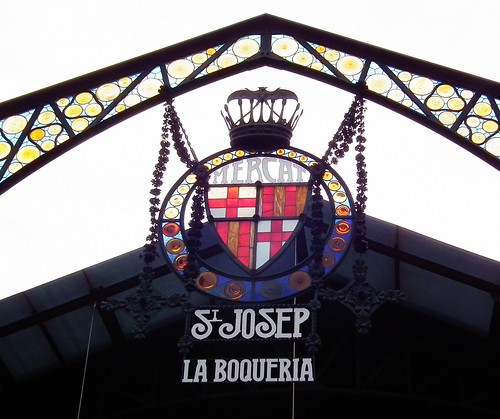 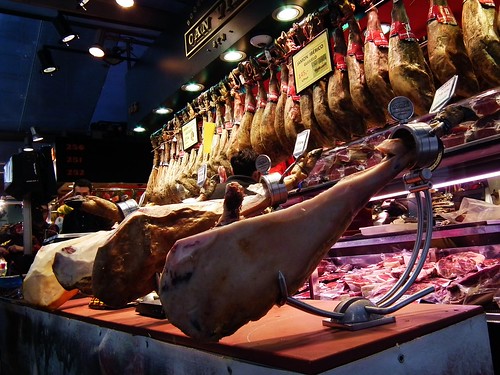 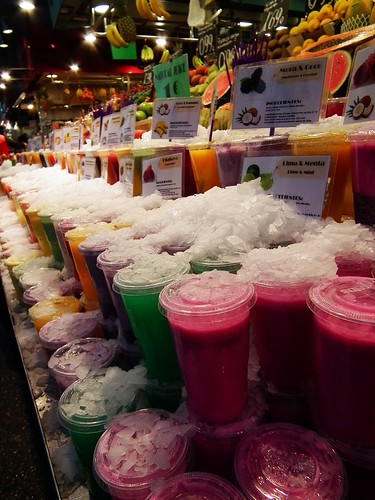 Midway down La Rambla we happened upon La Boqueria, Barcelona’s most famous food market. This covered market, ringed with restaurants and eateries, is a hive of activity with everything from cured meats and local produce, to candy, chocolates and my favourite, fresh juice. La Boqueria is a delight for the senses, with colours, sounds, and smells galore. I could easily have spent hours poking around all of the stalls but with only 24 hours in Barcelona we had to move on. 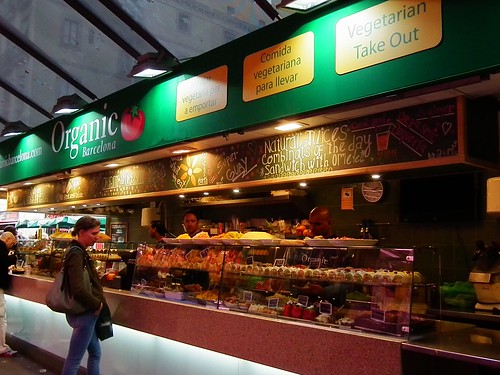 But not before lunch! Being vegetarian it isn’t always easy to find something decent for me to eat whiling we’re travelling, so when we saw a vegetarian restaurant stand at the market it was a no-brainer. Huge wraps and sandwiches were served with generous portions of salad, and all for €5 each! 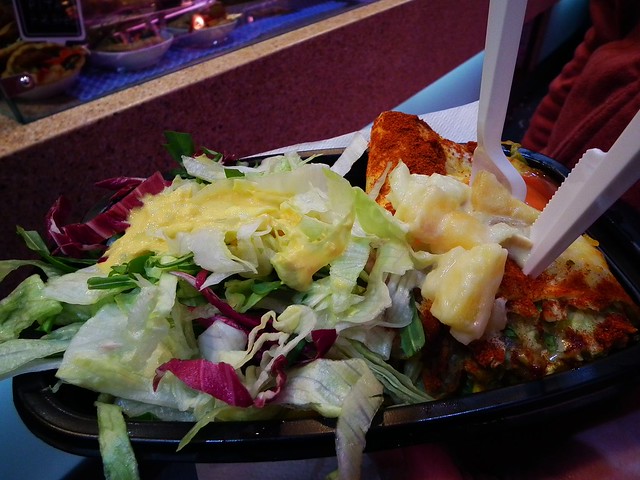 Well, I think that’s about enough for one post! In the next post I’ll let you know what else we managed to fit into day one of our trip to Barcelona, Spain!