We haven’t had the best start to 2017, to be quite honest. Until last week it was nothing major, just a cancelled flight between Ottawa and Dublin after Christmas, returning to a broken down car on a cold and rainy night in Manchester on New Year’s Day, and a whopper of a cold for both Damian and I over the past ten days or so. They say bad thing happen in three’s so maybe we can be forgiven for thinking that things were starting to pick back up in this Can-Irish household, but alas the worst was just waiting in the wings.

On Thursday afternoon our little girl woke up from her nap with a fever and within half an hour she was having a seizure in my arms. I called 999 and in less than ten minutes an ambulance had arrived, the seizure had stopped and I had four friendly Welsh paramedics sitting in my front room. She was diagnosed as having had a febrile convulsion, one of those things they warn you about with babies and a fever, which are apparently very common. It may have been a common reaction to a fever, but the whole experience felt anything but common to me. As it was her first febrile convulsion we were taken to the hospital in an ambulance, my first (and hopefully last) ambulance ride, where they tried to determine the cause of the rapidly spiking fever. They put it down to a virus, probably the terrible cold that had been ravaging the house recently. Viruses are real bastards, aren’t they?! We’re on day two with no fever and she’s pretty much back to herself so hopefully we can put the whole awful experience behind us. Unfortunately, that’s easier said than done.

Today has been dubbed Blue Monday because apparently it is the most depressing day of the year in the Northern Hemisphere. Sitting here on a cold, grey and rainy day in North Wales my mood quite matches the weather. I feel dreary and heavy with worry that I might have to witness my daughter in distress again; an understandable reaction to a pretty traumatic experience I imagine.

All this being said, I’m determined not to let the crummy start to 2017 get us down. It would be easy to just sit ourselves in front of CBeebies from now until the sun decides to show its sheepish face again, but what good will that do anyone? What do they say in Scandinavia? There’s no such thing as bad weather, only bad clothing? Well, with that in mind, this morning we rucked ourselves up and took to the forest. There’s nothing like a bracing stroll through the woods to blow the cobwebs away. While we jumped in puddles, collected sticks, looked for birds and dodged dog poo, we also tried to leave the worries and stresses of the last few days and weeks behind us, where they belong. 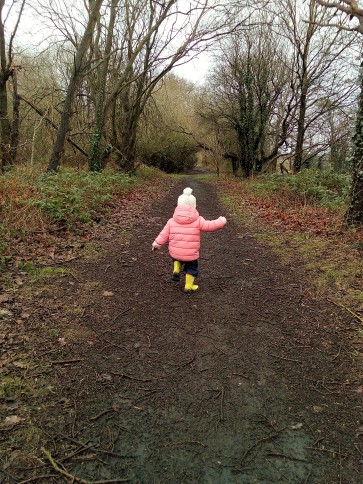 Here’s hoping your 2017 has started out on a positive note, and continues in the same manner for the rest of the year. And if, like us, your 2017 started out on the wrong foot, I hope it gets back into proper step soon. Maybe try some dancing to an 80’s classic and see where that takes you. Surely it can’t hurt!